Beauty and Function in Preserving Trees and Shrubs: The Japanese Technique Yakitsuri 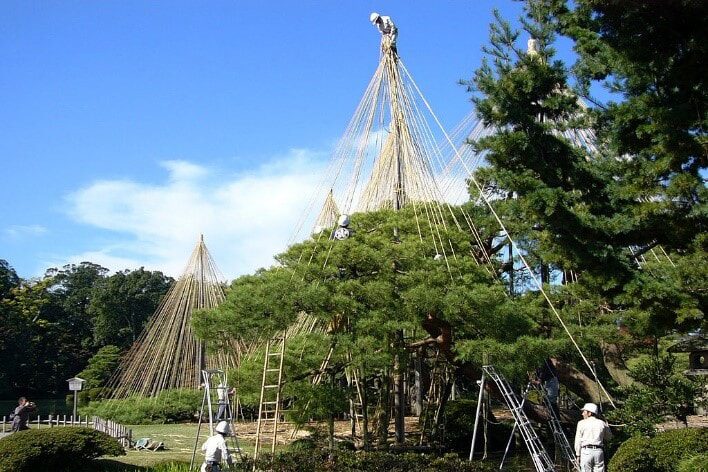 As soon as the winter season takes place, trees and shrubs are inevitably faced with challenges due to heavy snow. In the wild, harsh winter conditions might not be that harmful to various trees and shrubs that grow freely in the nature, since it is not obligatory for these plants’ shape and appearance to be carefully maintained.

But in Japanese landscape gardens, heavy and/or excess snow can easily cause irreversible damage to the trees and shrubs masterpieces, many of which are not only praised because of their beauty but also because of their age.

The Japanese technique Yakitsuri (in Japanese, Yakitsuri is originally referred to using the Kanji symbols 雪つり) has been applied for years in order to preserve trees and shrubs.

Staying true to the Japanese tradition and aesthetic, the methods applied in the Yakitsuri technique employ the use of all-natural materials. Furthermore, these all-natural materials are utilized in such an exquisite manner as to further enhance the beauty of the trees and shrubs in the peak of the winter while providing excellent support for the delicate, prone to damage branches.

Protecting Trees and Shrubs from Heavy Snow: A Complex Matter

Contemplating the majestic beauty of nature once the snow has fully covered the branches of trees can feel like submerging into a fairytale.

However, several inches of heavy snow can be extremely damaging to trees and shrubs, even though many of the plants are actually dormant during the winter season.

Interestingly, it is not the snow that is detrimental to trees and shrubs. In fact, snow can act as a natural insulator. Thus, plants can be well-protected from thawing temperature and/or freezing. That is exactly why most horticulturists recommend not to knock off the ice and/or snow from branches as doing so can easily lead to branch breakage.

On the other hand, leaving heavy snow intact can cause the severe bending of branches, which can also lead to breakage. But then again, shaking off the snow from a tree or a shrub is associated with a high risk of causing the plants traumatic injury.

And while the contradictory properties of heavy snow can seem quite puzzling when it comes to adopting the right approach, the Japanese technique Yakitsuri is a brilliant example of how gardeners can preserve their trees and shrubs and simultaneously limit the odds of any associated damage.

Yakitsuri is not the only one among other impressive techniques employed by Japanese horticulturists in the winter, and in particular, by Japanese agriculturists who have developed an amazing technology allowing them to keep harvesting vegetables despite the winter snow thanks to using snow as a natural insulator to protect the crops.

The Japanese Way to Prevent Branches from Snapping due to Heavy Snow: Snow Suspenders “Yakitsuri”

Quintessentially, the Yakitsuri technique takes advantage of the power of snow suspenders. For preserving trees, bamboo poles are raised along with ropes that are attached to limbs. When it comes to preserving shrubs, these are usually tightly secured around the circumference.

The exact origin of the Yakitsuri technique remains unknown but it is widely believed that it started at some point during the Edo period (1603-1868).

It is almost hard to believe it but as many as 800 ropes can be used in order to protect a single tree! The conical structures of the Yakitsuri snow suspenders form a crown-like structure above the trees which is as strange as it is alluring to the eye when gazed upon.

Whether strolling a Japanese garden in the spring, summer, autumn, or winter, contemplators can experience a celebration of the enchanting beauty of the living nature, marked by the eternal wisdom of the Zen philosophy.

For the purpose of providing reliable protection for trees and shrubs during the heavy winter, skilled Japanese craftsmen begin working at the very start of November.

In Japan, these skilled craftspeople are referred to as shokunin (originally 職人). Dozens of shokunin are in charge of equipping the trees with snow suspenders (yakitsuri), thereby making sure that the trees’ branches are protected from snapping under the weight of heavy snow.

The Yakitsuri process is a laborious endeavor, and it requires a very specific set of skills that take years to be fully mastered. Excellent teamwork is also crucial for applying the Yakitsuri technique.

Providing extra support for trees and shrubs through the application of the Yakitsuri technique is, in fact, a common sight throughout Japan.

Years ago, the practice was also common throughout Tokyo, although nowadays, due to the negative effects of climate changes, Tokyo no longer receives the same amount of snow that it used to years ago. However, the Yakitsuri technique is still utilized in Tokyo as a seasonal marker.

Nowadays, the Yakitsuri technique can be spotted in Jindai Botanical Garden, Inokashira Park, Hibiya Park, and Yoyogi Park, yet it remains most common in the Kanazawa and Kenrokuen Garden.

It is not uncommon for various restaurant owners who are renowned for their beautiful gardens and exquisite dishes to contract a shokunin team in order to secure their prized trees and shrubs from winter damage.

Video by: The Art of Travel AOT – Yakitsuri
Source: youtube.com

As if sinking into a form of za-zen (sitting meditation), admiring the whimsical magic of Japanese gardens is not a practice that can be put into words as it must be experienced through the mind and the heart. But on the practical side of taking care of the trees and shrubs that make up for the unique Japanese gardens’ design and appeal, the Japanese technique Yakitsuri is a spectacular example of merging beauty and function in preserving plants from damage due to heavy snow.