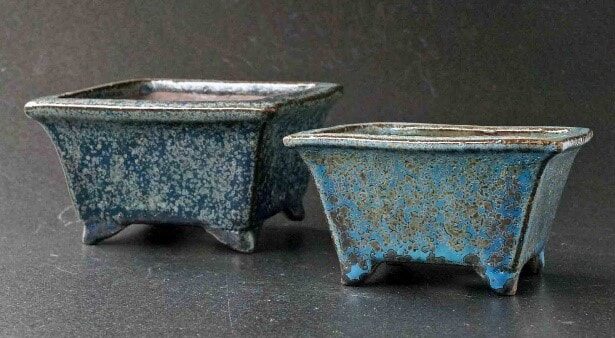 It was in the post-war period when Koyama Fujio developed a category known as the Six Ancient Kilns. The Six Ancient Kilns, namely Echizen, Seto, Tokoname, Shigaraki, Tanba, and Bizen encompass the distinguished kilns that crafted the most valuable and noteworthy types of ceramic kilns in the Country of the Rising Sun.

Known as Tokoname-yaki (常滑焼 ), Tokoname ware is still produced both in and around the municipality of Tokoname, located in the very heart of central Japan.

Bonsai tokoname pots have become one of the hallmarks of the ancient practice of cultivating miniature trees. While nothing should distract the contemplators from the exquisite beauty of the bonsai tree masterpiece itself, bonsai tokoname pots are a treasure of Japan. Their elegant design and superb functionality are perfectly suited to the art of bonsai.

Traveling Back in Time: Generations of Talented Craftsmen & Tokoname Ware

The Tokoname region has established a reputation as the homeland of Tokoname ware ever since the 12th century. By the beginning of the Heian period (794 – 1185), tokoname ware had already become a part of the daily life of the Japanese.

Transferring the accumulated know-how regarding the production and design of tokoname pottery has been passed on for generations.

In fact, if it wasn’t for the generations of gifted tokoname ware masters, the indigenous Japanese-style pottery tradition would have most probably never made it present days.

It was in 1998 when a third-generation tokoname ware artisan Yamada Jozan III (originally 三代山田常山) earned the well-deserved acknowledgment Living National Treasure because of his contribution in keeping the tradition of crafting tokoname pottery alive. Furthermore, Yamada was recognized as a National Intangible Cultural Asset.

The Museum of Living National Treasures of Japan is a wonderful place to sink into the delicate beauty and wisdom of bonsai pot tokoname along with multiple other craftworks that sparkle the imagination and leave the soul full of inspiration.

By January 2007, Tokoname was officially protected under the Japanese laws as a local brand.

Nowadays, the art of Tokoname pottery continues to extend far beyond the production of bonsai pots.

Producing incredibly sturdy yet spectacularly elegant and fine products, tokoname pottery master artisans are humble conveyors of practice with a value that reaches way beyond the borders of Japan.

Bonsai pots tokoname are the highest level of the art of bonsai part. But that is not merely because of the fact tokoname pottery, as well as tokoname masters involved in the ancient craft, are considered living national treasures.

A bonsai pot tokoname helps to keep the miniature trees in perfect health and shape. After all, it is the bonsai pot that anchors the tiny trees while also holding water and fertilizer and allowing the roots to breathe and develop properly.

On top of that, the elegant design of a bonsai pot tokoname is perfect for complementing the natural, authentic beauty of bonsai tree masterpieces without, by any chance, looking too obtrusive or ornamental, yet still being nothing less but impressively beautiful.

For many bonsai enthusiasts, bonsai tokoname pots have a sentimental value, too. Being handmade, tokoname pots make wonderful gifts but nonetheless, valuable antiques.

In fact, many love to collect bonsai tokoname pots and to expand the scope of the hobby of cultivating miniature trees by gathering the whimsical tokoname pots pieces of art.

Last but not least, as the respected bonsai master, John Yoshio Naka pinpointed, having more than just a single pot is a fantastic practice for bonsai enthusiasts. This way, the bonsai tree’s beauty can be appreciated from different perspectives since working with a different bonsai pot tokoname is “like changing the frame of the same picture.”

To many, investing in a bonsai pot tokoname might seem like a fancy flair. Indeed, tokoname pots and other types of tokoname ware are considerably high priced.

But we must not forget that the value of tokoname pottery is one that refers to a piece of art rather than just an ordinary pot. High-quality natural materials, handwork and a lot of knowledge and practice are what make a bonsai pot tokoname an invaluable masterpiece that is, actually, impossible to put into frames that only measure the monetary aspect of the pots’ value.

For anyone who is lucky to visit the Tokoname municipality in Aichi, Japan, don’t miss out enjoying the spectacular, one-of-a-kind nobori-gama (climbing kiln) – the Tōei Kiln, while submerging your senses in a symphony of ancient traditions, craftsmanship and Japanese aesthetics.

If you have the opportunity to hold a bonsai pot tokoname in your hands, take the time to sink into its profound beauty with all your senses. Let your eyes indulge in the fine patterns and feel the ancient Japanese wisdom embedded by the hands of generations of gifted local artisans.

Just like the art of bonsai was kept alive throughout the centuries, so was the art of producing bonsai pot tokoname and other types of tokoname ware that only deserve to be treated as finest pieces of genuine artistry.