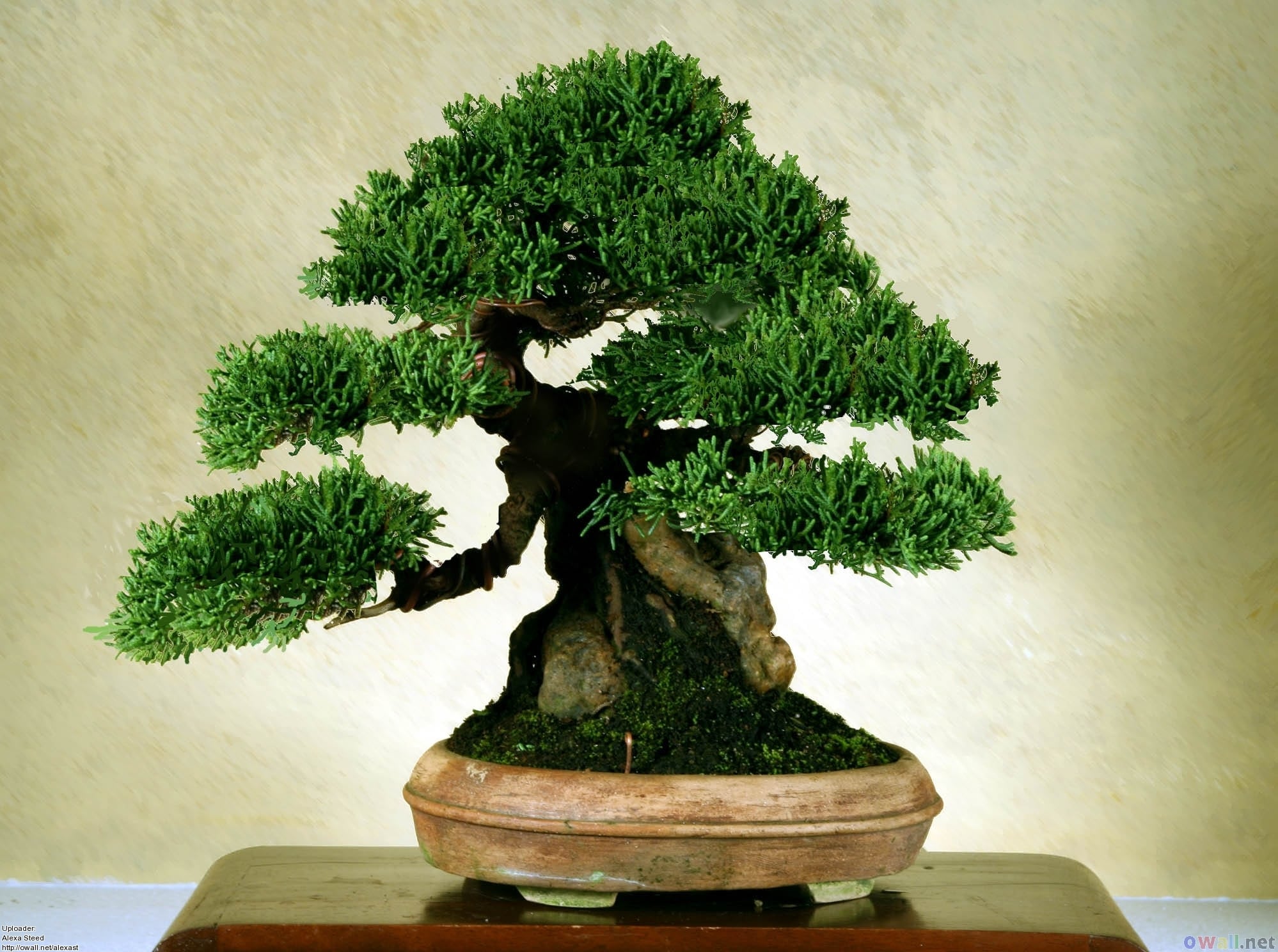 Bonsai trees are very unique trees that originate in Japan. They’re one part art form, one part decorative plant and one part ancient tradition. While they’re an excellent way to cultivate a small plant that won’t die when the weather changes, the true art in bonsai cultivation is in the shape of the tree.

Cultivating a bonsai to be both functional plant and piece of traditional art requires an idea of the techniques used to keep what would otherwise be a normal tree restrained. These techniques include trimming away specific leaves or needles from the growing plant, pruning back branches and roots of the plant, and careful use of mechanical devices and wires to shape the tree. Each of these techniques has a place and a proper usage, but it’s for enthusiasts to discover them.

One of the most interesting aspects of a bonsai is its size. The art of bonsai is in making a young tree have the appearance of a full-grown tree, only on a much smaller scale. This is different from the genetic breeding of dwarf trees, in that it requires no generational management of the genetic code of the tree. Instead, it requires careful management of the appearance of the tree using mechanical means, plant grafts and trimming.

Even where a bonsai is considered a small tree, there are a wide variety of sizes. The smallest bonsai trees are little more than seedlings, while the largest ones grow in the Japanese imperial palace and require as many as four people to move. All bonsai trees are grown in some kind of pot or tray. In generations past, the classification of a bonsai by size was done by how many hands it took to move the tree.

Because of how old the art of bonsai tree cultivation is, the names and exact sizes of each size classification have changed over the centuries. The most commonly accepted sizes are listed below, with more information on each of them. Keep in mind that other sizes may be encountered around the world, and that these are only the modern guidelines for bonsai tree size classification.

The three main size categories are the miniature, medium and large bonsai trees. Each of these classifications has subcategories of size, which tend to vary in exact specifics. Because each individual bonsai tree is unique, some may or may not fit into each category, despite their exact size. Even so, it’s useful to have an idea of what size classification your bonsai tree may fall into.

Kenshitsubo – These are the smallest possible variety of bonsai tree. Little more than artfully-designed seedlings, they’re also known as poppy seed sized trees. Rarely are they ever more than one to three inches in height. They can be lifted with two fingers easily.

Shito – These are the smallest common size of bonsai tree. Known as fingertip size, they grow generally between two and four inches in height. Often they can be found in pots no larger than a thimble, leading to their other name, the thimble bonsai.

Shohin – These bonsai trees are in a category that overlaps others, leading to the disuse of the name. They grow between two and six inches in height. They’re also known as the palm bonsai, because of how they easily fit in a palm. Shohin and Shito are differentiated from other small bonsai trees by the techniques used to create them.

Mame – These bonsai trees grow between four and eight inches in height. They are the smallest of the bonsai trees known as one handed trees, because it takes a single hand to move them. Often they have larger pots than Shohin bonsai trees.

Komono – Also known as the generic small bonsai tree, the Komono bonsai grows on average between six and ten inches. They are almost the largest tree that can be moved with one hand.

While there is some variation between the exact heights of the bonsai trees at such a small size, these are the most common classifications.

Katade-Mochi – The largest bonsai classification that can be lifted in one hand, the Katade-Mochi bonsai grows between ten and eighteen inches in height. These are some of the more common tree sizes to work with, because they are neither too small to prune nor too large to handle.

Medium and Big – English countries tend to forsake the Japanese names for size classifications. The Medium bonsai is between twelve and twenty-four inches in height, while the Big bonsai is twenty-four to thirty-six.

Omono – These large bonsai trees are the first among the four hand category. They grow anywhere from thirty to forty-eight inches in height. They are differentiated from the Dai category in very minor ways, such that both are classified as Very Large in English.

Dai – Again, these share the same size range and style as the Omono bonsai. The differences are likely only known to ancient Japanese bonsai masters.

Hachi-Uye – These are among the largest bonsai trees. They are known as six hand trees because it takes as many as three people to move the tree in it’s pot. They grow between forty and sixty inches tall.

Imperial – The Imperial bonsai is the largest and most majestic of all Bonsai trees. They grow between sixty and eighty inches tall and are found most often in the Japanese imperial gardens. They are also known as eight-handed due to the number of people required to move them.

Bonsai tree size classification is as much an art form as making the shape and style of the bonsai tree itself. None of these categories are set in stone, nor do many worry about the exact size. Perhaps the only classification that has not changed over the ages is that of the Imperial bonsai, because of the origin of the name. By definition, any of the largest bonsai trees in the imperial gardens are Imperial bonsai trees. While different sources disagree with the individual smaller sizes, what’s truly important to the cultivation of a bonsai tree is the shape and style used to create it. Very rarely does the size matter save for someone purchasing a small indoor variety of bonsai tree to take care of themselves. Bonsai cultivation and style is definitely an art form.