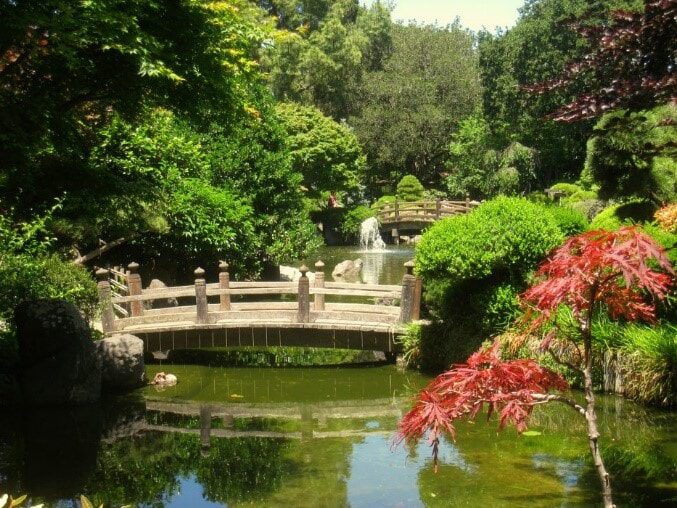 San Mateo Central Park Japanese Tea Garden is considered one of the finest gardens on the territory of California state.

A beautiful gemstone that represents the core values and aesthetics of Japanese tea gardens, anyone can get mesmerized by tiny Zen oasis hidden in the very heart of Central Park.

Meeting the Father of the San Mateo Japanese Tea Garden

A place of undisturbed peace and serenity, San Mateo Japanese Tea Garden consists of a tea house, bamboo grove, koi pond, and nonetheless, a granite pagoda. All of these features are highly symbolic in Japanese culture, the major purpose of walking through a Japanese tea garden being the experience of peace, harmony, and natural attunement with the surrounding environment.

What’s more, Mr. Nagao Sakurai is the very first landscape architect to have successfully graduated from the Imperial University of Japan. For two decades, Sakurai occupied the position of a Chief Gardener at the Imperial Palace in Tokyo.

In 1939, the Japanese government selected Nagao Sakurai as a leader of the design of the Japanese Exhibit at Golden Gate, as well as New York International Expositions. It was in the 1950s when Sakurai immigrated from Japan to the USA.

Some of Sakurai’s earliest commissions in the state of California was designing the Shikyeon Garden (nowadays known as the Hannah Carter Japanese Garden), which was fully completed in 1962.

In fact, experts believe that this particular commission was Sakurai’s career jumpstart establishing the reputation of one of the most highly respected landscape designers.

Furthermore, the legacy of Nagao Sakurai in the acceptance and promotion of Japanese culture after the dark times associated with World War II is simply invaluable.

Little by little, Sakurai managed to become one of the leading designers of the post-war period, his numerous successful projects including not only the San Mateo Central Park Japanese Tea Garden but also the San Francisco Zen Garden in Golden Gate Park, the Japanese Rock Garden, and the Nishinomiya Japanese Garden in Washington, among others.

When is the Best Time to Visit San Mateo Japanese Tea Garden?

San Mateo Central Park Japanese Garden is beautiful all year round. As other Japanese gardens, this one doesn’t make an exception when it comes to restraining from gaiety and showiness in favor of simplicity and consistency in landscape design.

It is good to keep in mind that pets are not allowed in the garden. Probably the best time of the day to pay a visit and truly experience the tranquility of the Japanese garden is during the less crowded hours and days of the week.

Early Spring and late Winter are considered the best time of the year to enjoy the mesmerizing beauty of San Mateo Japanese Garden.

Early Spring is when the cherry blossoms are in full bloom, making up for a truly unique episode of walking down the masterfully arranged pathways, letting all of your senses celebrate the joy of life witnessing the living nature embracing the new beginning that comes with the spring season.

Late Winter is when the San Mateo Japanese Tea Garden turns into a whimsical fairytale-like piece of Heaven on Earth, where it may seem as if time has stopped while admiring the peaceful glory of the carefully arranged and maintained winter landscape.

But the beauty of the autumn season in San Mateo Japanese garden is not to be underestimated either.

For those who want to witness the feeding of koi fish, it is good to remember that this is done only during strict hours of the day. Koi fish symbolize luck and good fortune.

Nevertheless, koi fish are intricately and deeply connected to Japanese culture. Koi fish are also considered a symbol of abundance. In ancient Japanese tales, koi fish are depicted as successfully swimming upstream, even if that means going straight through waterfalls.

And while it can be rather complicated to come across koi fish in the wild, every visitor of the San Mateo Japanese Tea Garden can be blessed with luck and fortune by seeing the local koi fish swimming in the ponds. These colorful creatures are known to grow extremely fast in mud ponds, and they also tend to be very expensive.

Video by: Business Insider – Why Koi Fish Are So Expensive | So Expensive
Source: youtube.com

The unparalleled charm of restraint that is a major concept in Japanese gardens can be not merely seen but also experienced in San Mateo Japanese Garden.

Most importantly, the San Mateo Central Park Japanese Tea Garden is not merely a beautifully arranged garden to spend an afternoon at. Instead, it represents the wisdom and beauty of Japanese tradition and aesthetic embedded in the core philosophy of Japanese gardens that aim to satisfy the human craving for the natural, the peaceful, and the harmonious – all of which were essential elements in offering a retreat where one can attain spiritual and emotional recreation.