Bonsai Saikei: What You Need to Know 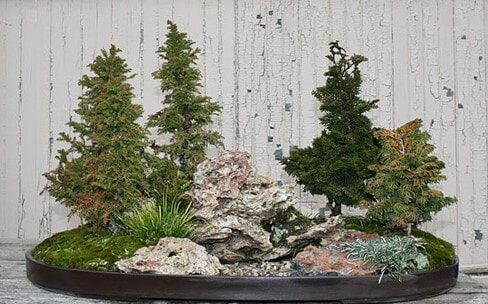 What better way to create a landscaped design than a saikei.

Another term for saikei is “painted landscape” with works that seem to focus on a distant memory. A landscape lost in time.

Saikei is a dramatic representation of an actual place or from the artist’s dream. There is the use of different natural materials such as rocks, soil, bonsai trees and water to create impressive landscapes.

What is Bonsai Saikei?

It is quite similar to the Chinese art form penjing as well as the Vietnamese Hòn Non Bộ wherein tray landscapes are made using soil, water, and rocks on a single container or tray.

A saikei is usually contained in a huge ceramic tray that has low edges. Inside the tray are soil, rocks, and pebbles arranged carefully to create a natural landscape.

Some artists model their creations from actual landscapes such as a seaside, garden or mountain with living trees and forests.

Saikei creators strive to create depth and a natural effect on their work. This is commonly seen in small trees or bonsais planted on the soil or medium and then arranged to create perspective. Smaller trees are found at the front while larger trees are at the back.

Some creators are very meticulous and will grow bonsai separately just for a specific saikei piece. They cultivate small trees to look like mature ones to be able to match the desired landscape design.

Aside from bonsai, small plants may also be added as well as ground cover to recreate grass and shrubs or plants found in the area.

The difference of saikei from other art forms

Although it may look like saikei simply copies the features of a bonsai, bonseki, and bonkei, it is very different from these forms.

First, it has mandatory rules such as the use of stones, where trees were placed and the positioning of the roots on the tray.

Bonsai makes use of stones for the base of the tree just like the seki-joju and the bonsai that grows over a rock or ishizuke. However, these types of bonsai do not form landscapes.

Saikei is very particular with the shape of the ground as well but this is not important in bonsai. Saikei is all about creating a natural landscape and it does not emphasize the characteristics or features of a single tree.

Bonkei does not make use of any living material. It only uses dry material as well as miniature animals, people, structures and vehicles making this setup easy to maintain.

In saikei, natural, living material is used like plants and trees so this becomes a challenge to maintain.

And when it comes to displaying these art forms, saikei is displayed similarly to a bonsai. These need to be placed under the sun for some time in a day and watered as well. Pruning is also essential to keep the bonsai tree healthy and small.

Where did Bonsai Saikei originate from?

Japan has a school of saikei. This school was founded after the WWII. Kawamoto trained early to become a saikei master when he was just a very small child. After his father died, he was the one who ran his family’s bonsai nursery business.

Kawamoto actively promoted the practice of saikei and even published books like the “Bonsai-Saikei and Saikei: Living Landscapes in Miniature.” He further contributed to learning and training people to create saikei when he joined a group that created the Nippon Bonsai-Saikei Institute as well as the Nippon Saikei Association.

Since Saikei started after WWII, it is considered one of the youngest art forms. It may not have deep traditions but it is related to older forms just like the bonkei.

After the war, saikei was the environmentally responsible way to grow trees for use in bonsai. This made even the most economically-challenged family able to enjoy growing bonsai at home.

How to use Bonsai Saikei in your garden

Saikei is known to be less demanding than bonsai. There are many reasons why this is so.

First, the saikei growing container will allow more soil to be used for planting bonsai. There is no need for more frequent watering because the soil can keep water to benefit plant roots.

Saikei is also easier to assemble. Even someone new to this form will find it easier to grow plants in saikei rather than in bonsai form. Trees that are used for this practice may be younger and therefore are less expensive than mature bonsai trees.

As long as you are growing healthy trees, you don’t need to spend too much time caring, shaping and pruning your trees. Saikei is perfect for beginners and for anyone new to growing bonsai.

As a saikei tree arrangement becomes older, some of the trees planted in the pot may grow out of proportion from the rest of the elements of the display.

This change is actually expected in saikei and is actually one of the goals of this art form. You may reduce the size of your trees or remove the overgrowing trees from the display.

If you chose to remove a few trees that are growing then don’t just throw these away. You can use these to make a new bonsai display instead.

After removing old, overgrowing trees, you must augment the arrangement with new trees and grow these once more under the saikei principles.

Where saikei shines the most

Saikei projects can be of different subjects. For instance, it can be about a distant dreamy landscape or a particular Japanese garden.

The development of the art form focuses on the complexity of the landscape. The artist may decide on different techniques such as planting among rocks or a mountain forest with different materials including trees, flowers, grasses, moss and ground cover.

To conclude, saikei appeals to novice creators. It has simple rules compared to bonsai plus is easy to create because it uses simple aesthetics.