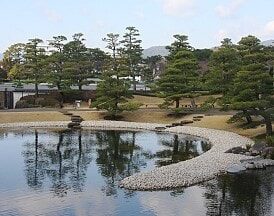 A Japanese garden uses various elements. These include streams, ponds, hills, and islands to form miniature reproductions of the natural scenery. The following are a few of the most typically used elements:

Since the ancient times, stones have a big role in the Japanese culture.

In Shinto, people worship the prominent big stones as kami while they use gravel to label sacred grounds, as shown in some of the ancient shrines like the Kamigamo Shrine and Ise Shrine.

In the modern garden, big stones symbolize hills and mountains. They also set ornamental accents and act as the construction material for pathways and bridges.

Gravel and smaller rocks are ideal for streams and line ponds.

Dry gardens often have stones, especially the bigger ones that symbolize islands, mountains, and waterfalls. Sand and gravel replace water.

Ponds are the main element of almost every Japanese garden.

It often represents mythical and real seas or lakes.

Sometimes, they offer a habitat for carps that introduce extra life and color to a Japanese garden.

In the recreational forms of gardens, people use ponds for boating and enjoyment from the pavilions constructed through the water and from the plazas or embankments on the shore.

It typically serves as a site for the aristocratic poetry and moon watching parties in the previous centuries.

Islands are long-standing element of a Japanese garden.

They exist in different sizes ranging from the single stone outcroppings to big islands that are huge enough to provide support to buildings.

They typically signify real islands, or they come with religious symbolism like those constructed to resemble cranes and turtles symbolizing health and longevity.

Bridges are also among the common elements of a Japanese garden. Gardeners use them in connecting islands, cross streams, and ponds.

Made of wood and stone, bridges vary in complexity from one simple piece of the uncut stone laid across the stream for elaborating covered structures made of wood that extend over 10 meters.

Gardeners use shrubs, trees, flowers, and lawns of all types in a Japanese garden.

Cherry and maple trees are commonly used plants for their periodic appeal. Placing them correctly is important to emphasize those characteristics.

Conversely, bamboo, pine trees, and plum trees are also popular due to their outstanding beauty that shows up during the winter season as the other plants become dormant.

Mosses are also common. Gardeners use them extensively. Mosses exist in more than 100 species which appear exclusively at Kokedera.

Gardeners carefully arrange the plants all over the garden to mimic the nature.

They put much effort into maintaining the garden’s beauty. They meticulously manicure shrubs, trees, and lawns and sweep clean the sensitive mosses to keep them free from debris.

Burlap, straw, and ropes are best to use during the winter season to protect and insulate plants and trees from the icy snow.

The straw wraps protect the entire garden from bug infestations.

Bigger Japanese gardens, particularly the Edo Period’s strolling gardens using huge man-made hills. The hills represent mythical or real mountains. You can set them in the ascending position. Have a lookout for your guests. Treat them to the panoramic view out through the garden.

Lanterns are available in different sizes and shapes. They’ve been a typical element of the Japanese garden style for a very long time.

Stone is the most commonly used material in making lanterns.

Lanterns are mainly for the carefully chosen locations like on islands, in the tips of peninsulas, and beside a large building where they give a light and good-looking aesthetic.

The most common partner of lanterns are the water basins. They both make up a primary component of a tea garden.

A lot of gardens come with water basins made of stone. These are called tsukubai which are for ritual cleansing, particularly before a tea ceremony.

The basins differ from ordinary and simple depressions in the uncut rock to elaborately engraved stone masterpieces. They frequently come along with the bamboo dipper that you can use for scooping up the water.

Today, water basins are typically an ornamental addition that is good not just for any practical purposes. Water basins are a vital component of a tea garden.

Paths are now an integral aspect of a Japanese garden along with the arrival of tea and strolling gardens.

A strolling garden features round paths made of crushed gravel, stepping stones, and packed earth. Paths lead the visitors to the best though controlled angles of the garden.

They segregate various areas like the isolated grave and hidden pond. Winding paths act as partitions for these two areas, making the atmosphere more pleasing.

Most forms of gardens are basically to provide a wonderful view for everyone inside a building like a villa, temple, or palace.

On the other hand, everybody should be able to enter them and have fun within.

Buildings like tea houses, pavilions, and guest houses sever as part of the orchard’s composition.

Japan is the country where a big population leaves a small land intended for flower gardens. Thus, the Japanese have places where they can grow living flowering and the colored carps. They existed in Japan for a long time.

People crossbred them for more than 100 years to produce high-valued carps. It became a competition and the judges pick the winning carps based on the colors, number of spots, forms of scales, and patterns on their skins.

Carps can survive for up to 50 years. In the Japanese culture, carps are the symbol of perseverance and strength.

Borrowed scenery or shakkei is a concept of combining the background site outside the orchard into the garden’s design.

Both natural objects like hills and mountains and the man-made structures like the castles can help you come up with a fabulous borrowed scenery.

In the modern era, skyscrapers are often the unintentional borrowed background for some beautiful gardens within the cities.

There could be more interesting things you don’t know about these elements of a Japanese garden. This video may help.