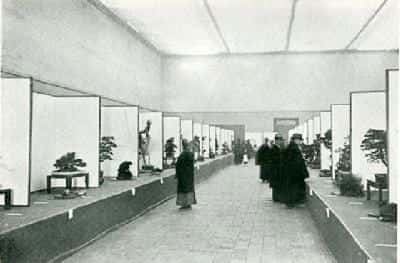 The first dwarfed trees occurred naturally in the wild and were discovered growing in the mountains of China. They were prized because their unique aged and gnarled appearance was not created by human hands. Thousands of years ago, the Taoists believed that recreating aspects of nature in miniature form endowed that particular recreation with a magical concentrated energy. This art form known as Penjing means tray scenery. Penzai or Punsai, a form of Penjing, translates into tray plant, which typically involved a landscape created with miniature trees and rocks.

The Chinese developed the pruning and binding techniques that gave the trees an aged appearance along with unusually shaped features. Some believe the Toaists purposely shaped the branches, trunks and root structures to mimic the bodies of dragons, serpents and other animals of Chinese folklore. Others contend that the structural deformities more closely resembled yoga positions. Though the Buddhists undoubtedly created the Penzai for centuries, mention of the trees did not appear in documented form until around 600 A.D. The first pictorial evidence of the Penzai tree appeared in 706 A.D. in the tomb of Prince Zhang Huai. Upon entering the tomb, archeologists discovered painted frescoes depicting female servants carrying Penjing, which contained miniature trees and rocks.

Also during this time, under the rule of the Hang Dynasty, Chinese monks migrated to Japan and other parts of Asia, taking with them the art form and examples of Penzai. The Japanese monks quickly learned the techniques required for making the miniature trees, which later became known as Bonsai. The Japanese also developed their own methods creating their own versions of the dwarfed trees, which many believed symbolized the harmony between man, soul and nature. As in China, the trees gained honor and reverence in Japan. The writer of an ancient scroll dated around 1195 A.D. expresses the appreciation and pleasure he derives from gazing at the unusually deformed little trees.

From the monasteries of the monks, bonsai trees made their way to the homes of the royals and the affluent. The trees then became status symbols and also reflected honor. By the 14th century, bonsai trees were a highly regarded art form. Bonsai owners originally displayed the plants outdoors. The affluent later created special shelves indoors which provided the bonsai with a place of honor. Beginning in the 1600s, the art form evolved again. Pruning techniques used generally removed all but the essential parts of the plant, which created a minimalist effect. These methods reflected Japanese culture and philosophy, which believed that refining one’s lifestyle meant eliminating all but the necessary elements. This philosophy holds true of the culture today and visitors see these simplistic elements in modern day Japanese gardens.

During medieval times, bonsai trees became available to Japanese people of all social classes. The increased demand required more artists having the knowledge and skills necessary for creating the bonsai. The popularity of the trees also firmly engrained the bonsai into Japanese culture. Replicating the techniques of Taoists monks, the Japanese began creating a variety of miniature landscapes. Trees combined with buildings, people or rocks became known as bon-kei. Sai-kei was the term used for replicating a specific type or area of landscape.

News of the unique miniature potted trees spread to other parts of the world beginning in the mid-1600s, as merchants ventured to and from Asia. By the end of the 1700s, provinces in Japan began holding exhibitions and competitions. England’s Queen Charlotte received a bonsai as a gift in 1806. Major world cities that included London, Paris and Vienna, eventually featured the trees in world exhibitions. During this time, the Japanese shared some of their secrets in the art of creating bonsai.

The trees, which stood approximately one to two feet in height, required two to twenty years of masterful cultivation and care. The Japanese chose some species of fruit and flower bearing trees in addition to varied species of pine. The branches, trunks and roots of the tree obtained their odd appearance by twisting these areas into the desired shape and holding the configuration using bamboo and wire. Parts of the plant also endured burning or cutting. Artists also commonly grafted new branches, which helped create a particular shape.

They created the illusion of age by smearing parts of the tree with sweet syrup, which enticed termites into feasting on the wood. After the termites burrowed to specified depths, artists removed the insects and allowed the tree to undergo a healing process. The new wood and bark more closely resembled a much older tree. The miniature trees also commonly shared a pot with other landscaping features that included rocks and moss.

The Japanese brought the art form to the United States when they migrated to the Americas. Chinese immigrants also brought their version of the miniature art form but refrained from sharing their artful techniques until well after World War II. Westerners were not allowed the extensive knowledge and instruction concerning bonsai growth and development until the late 1960s. After studying the art in Japanese nurseries, a group of Americans returned to the United States and founded the American Bonsai Society. Citizens from other worldwide countries soon traveled to Asia in hopes of the learning the horticultural art form. Japanese masters, likewise, traveled to other continents, bringing the knowledge to those desiring to learn.

The popularity and demand of the bonsai eventually influenced means of mass production. Manufacturers trained individuals in the art of bonsai creation and the techniques evolved into methods that developed bonsai trees in a fraction of the time. Today artists create bonsai trees from seed, cuttings from other trees, or by using grafting techniques. Many nurseries grow and export varied versions of the bonsai. There are over one dozen different styles of the bonsai tree that range from upright and straight to the more recognizable twisted configuration. Nurseries also typically use tree species indigenous to a particular region, which ensures the health and heartiness of the plant.

Durability Of A Tradition

Though created under seemingly harsh conditions, with proper care and maintenance, bonsai trees last indefinitely. Centuries old bonsai trees originating in Japan continue living today. The Sandai-Shogun-No Matsu is a pine needle variety that stands on display in the Tokyo Imperial Palace. Part of an historic collection, documents indicate the tree began life as a bonsai as early as 1610.

The bonsai continues representing the culture and traditions of Japan. Just as the pine tree remains a beloved symbol during the Christmas holidays, the Japanese consider the bonsai an important feature of the New Year. Homes often have a special location, known as the tokonoma, which proudly displays a miniature apricot or plum tree in bloom.