How To Cultivate The Roots of a Bonsai Tree 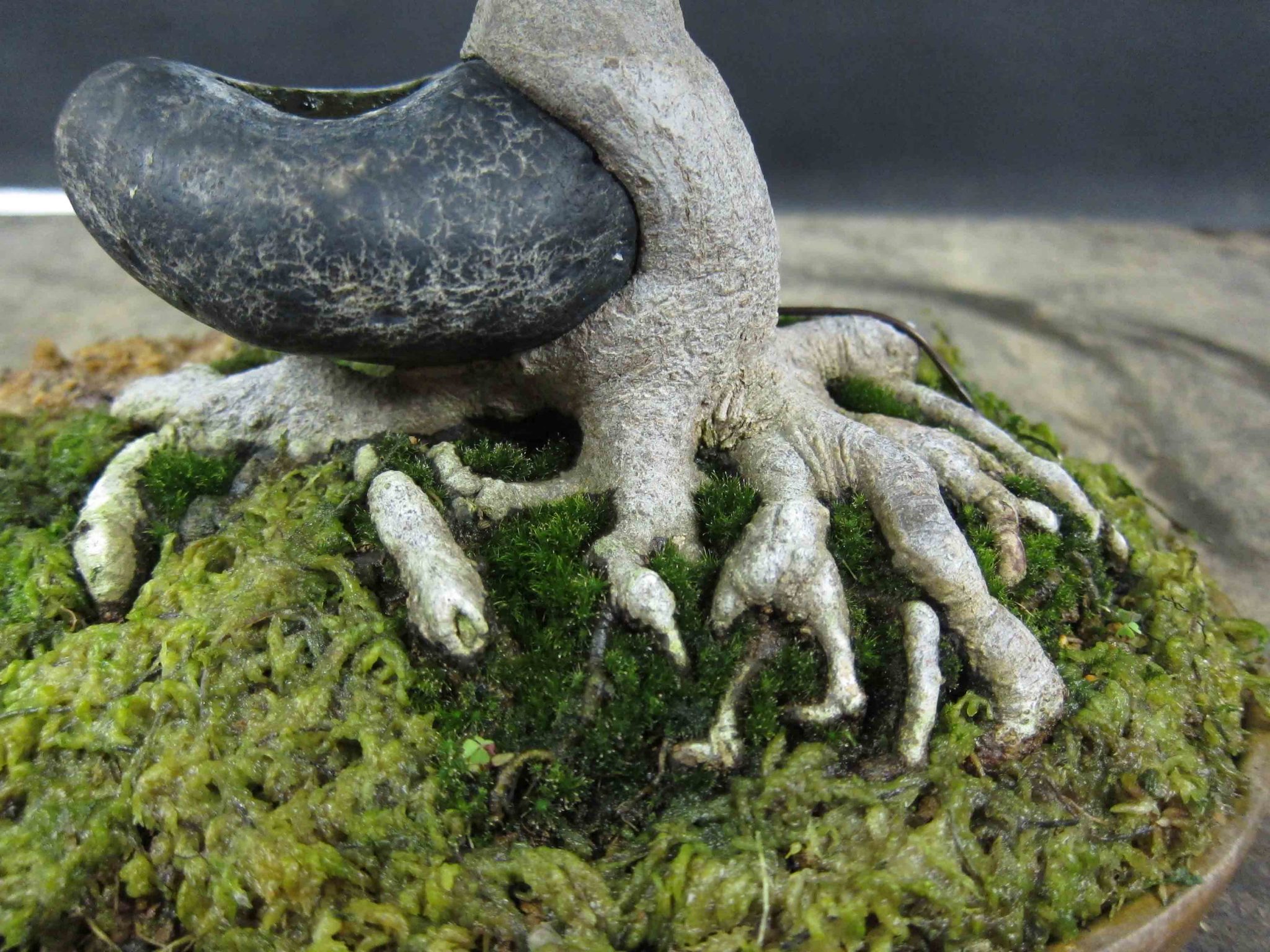 The roots of the bonsai are composed of the exposed surface roots and the underground root structure. The external roots are called the nebari. Cultivating a proper nebari is crucial to proper bonsai growth and appearance. If working with an older plant, you will have to take special steps to restructure the nebari if it did not originally grow in a proper fashion. Subsurface roots will need to be pruned for optimal root growth.

The nebari forms the lovely external root structure of the bonsai. Although there are differences among species of trees, there are some basic forms. The “eight direction” style of nebari known as happo-bari orhappo-ne is commonly seen in many traditional bonsai styles such as the chokkan (link to bonsai styles page) and hodkidachi (link to styles page).

For leaning bonsai styles such as the kengai, the nebari is better developed on the non-leaning side for structure and balance. Finally, some root structures are undesirable for both structural and aesthetic reasons. These are known as “imi-ne” or “dreadful roots”. These roots are gnarled and intertwined.

Cultivating The Nebari Of A Growing Tree

Your bonsai will need to be repotted several times as it reaches its mature size. While the bonsai is still growing, its nebari can be pruned during repotting. Before pruning, make sure that the external roots are growing and spaced evenly from the trunk.

Once that has been observed, you can begin pruning. You will only prune the undesirable outgrowths, paying attention to any imbalanced growth or imi-ne. After pruning, repot the bonsai promptly. You can repeat this process as needed to cultivate the nebari.

Restructuring The Nebari Of A Mature Tree

If you are working with a more developed or mature plant with a poor nebari, you will need to take extra care in repairing the nebari. There are three methods you can use. Nebari repair can be done by simple cutting, air layering or grafting.

One method is to simply cut off the undesirable parts. You will target the bark, cambium and phloem. The cambium is the rapidly developing growth tissue just beneath the bark. Phloem transfers nutrients to the roots. The deeper structure of the root should be left intact. After cutting off the areas where new root growth is desired, the plant is left alone to allow the roots to grow.

Air layering (link to air layering page) is built off of the previous method. When air layering, you will remove the bark, cambium and phloem. Then, instead of leaving the open roots alone, you will wrap them with something to retain moisture. Dampened sphagnum moss is frequently used for this purpose.

The new roots will develop on the inside of the covered surface. The advantage of this method is that root development is quicker and more successful than just cutting off the undesirable parts. The main disadvantage is that it can take an extra effort to begin the process.

Grafting (link to grafting page) is another option that can be done alone or in addition to the other methods. With grafting, you will attach a young tree of the same species to your mature tree in the place where you want to encourage root growth. The young plant will take root and grow new roots in the desired site.

The Underground Roots: Pruning The Tap Root And Extraneous Roots

The roots below the ground’s surface will need to be pruned. The timing, approach and extent of pruning will depend on the age of the tree, condition of its nebari, and thickness of its trunk. The tap root will also need to be pruned.

The priority for young, growing trees is developing a thick trunk. Pruning does not generally begin until the trunk has been established. This is done by careful nurturing and repotting. The process of repotting aids growth by systemically giving the plant just the right amount of room to grow and nutrients without stifling the growth in a too-small area or diverting nutrients due to a too-large area.

Choosing the right pot is essential. It should be just large enough to accommodate the roots and some growth room but not an excessive amount of extra space. If the pot is too large, it will be hard to provide the roots the proper amount of water. The water will either evaporate or, if over-watered, the soil will be over-saturated. Over-saturation is a problem because it depletes the soil’s oxygen which contributes to root rot.

Repotting should be done carefully. You can start with a small pot or begin the growth process in the garden. When repotting, be very careful to not disturb or break the roots. Careful cultivation and repotting will help the plant to grow and trunk to thicken. The trunk thickening process can take a couple of years.

Once the trunk has thickened sufficiently, the underground roots can be pruned and the bonsai can begin to be actively crafted. At this point, the tree can be repotted into a pot that accommodates the roots comfortably but without excess space. Before repotting, prune the roots to fit the pot. Good bonsai root structure is fine, dense balls of thin roots near the surface of the soil. To achieve this, root pruning will be required. The tap root will need particular attention and pruning for the root system to properly develop.

The tap root is the long, thick root that grows straight down into the earth. It grounds the tree by providing a sturdy, deep root. This is crucial outside due to wind and other external forces which can easily unseat a fledgling plant. A bonsai does not face these conditions, so it is unnecessary to have a prominent tap root. Pruning the tap root is necessary.

Pruning the tap root offers advantages to the bonsai, too. A large root such as the tap root takes up a lot of space and consumes resources. Because of that, the other roots do not properly develop and the leaves and branches are not as healthy and lush. Smaller roots will develop at the site of the tap root pruning. This will allow the bonsai to develop the desired root system of dense groupings of lateral and hair roots that grow just below the surface of the soil.