How To Prune Bonsai Tree Branches 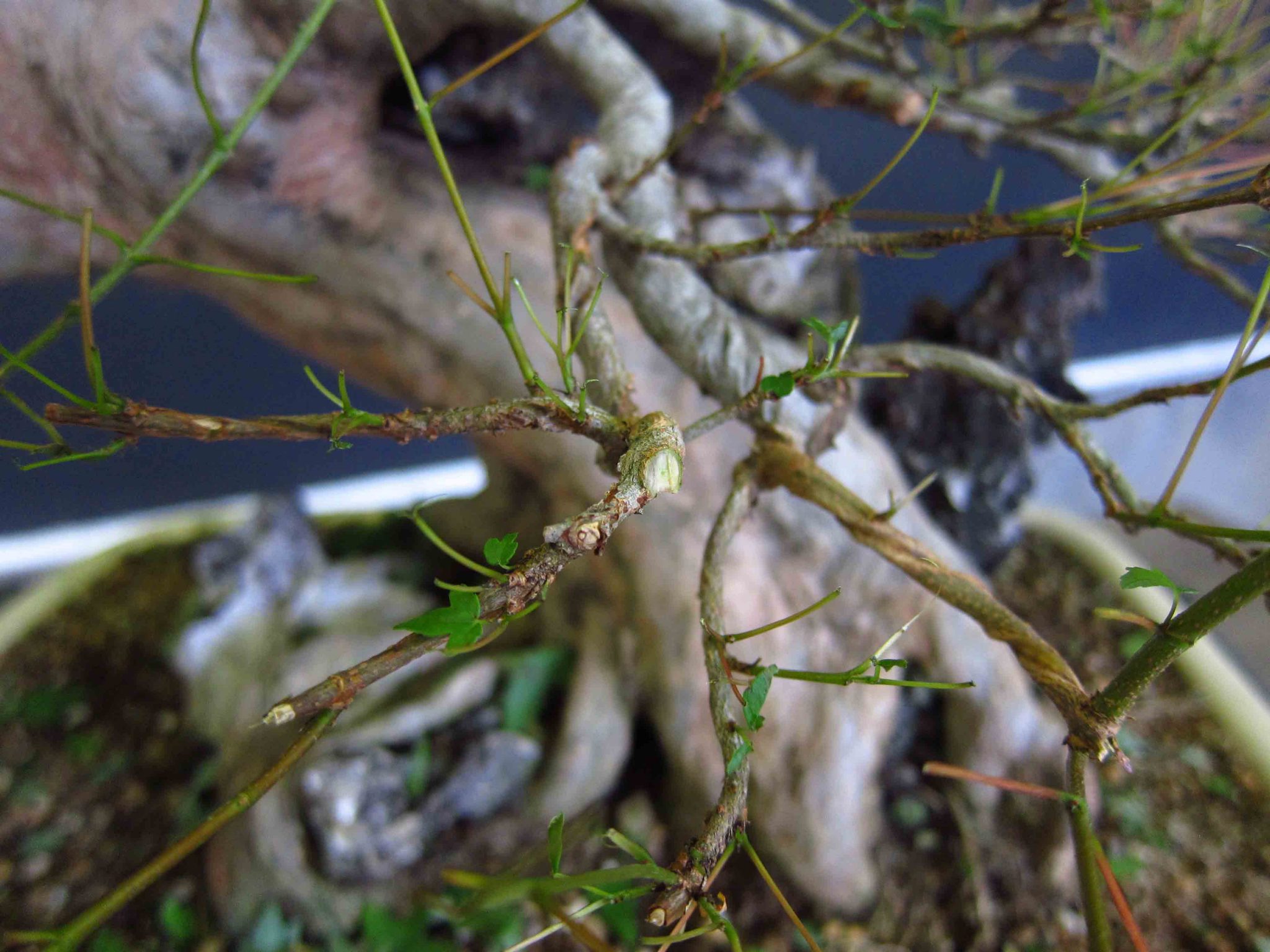 Pruning is the process of cutting away unnecessary growth on the bonsai. Branches, buds and leaves are pruned. This controls the progress of the bonsai’s development, allowing you to mold the developing tree as needed and later maintain its mature form. Branch pruning is especially essential to creating and preserving the bonsai’s form.

The tree is considered mature enough for branch pruning when its trunk and first three branches—named in order of emergence as ichi-no-eda, ni-no-eda and san-no-eda—are established and the tree’s basic form has emerged.

Branch pruning is targeted at emerging growth as well as existing limbs that do not conform to the bonsai’s shape. Branch tips and apical buds pruned to stop the growth of branches.

Existing branches are also pruned when they stick out from the bonsai’s form or are otherwise unattractive and not harmonious to the tree as a whole.

The underlying goal of branch pruning is the same as the general rule of bonsai care: to achieve kesho-sodai. The bonsai gardener seeks to create the similar form of the full-sized tree in its miniaturized, bonsai form. Branch pruning is an important tool in crafting that form.

With that basic goal in mind, focus can be placed on the specific aims of branch pruning. The most obvious result of pruning is to remove extraneous and unattractive budding limbs and more mature branches.

This helps produce kesho-sodai in a couple of ways.

Branches that are removed do not contribute to the bonsai’s shape or overgrow the final size.

The removed limbs also provide space and light to the inner, smaller branches and lateral buds.

If you are still working on thickening your tree’s trunk, branch pruning will help. The process of tate-kae involves selective pruning to increase the trunk’s size.

Pruning is typically done on the trunk right above the branch that you want to model as your new trunk. This process can also be used to change the direction of the trunk’s growth.

Special consideration should be given if your tree bears flowers or fruit. Pruning the buds will also inhibit the flower or fruit growth. Consider your goals and your tree’s needs when deciding whether to remove those buds.

When pruning, keep the desired form in mind. Cut away the branches which do not blend with that form. Strategically prune branches to provide adequate sunshine and ventilation for smaller branches and the inner lateral buds. New branches will grow from those lateral buds.

The Importance Of Lateral Buds

Lateral buds are the emerging limbs growing off of existing branches. Because they will mature into new branches that can be molded into harmony with the bonsai’s design, they can salvage an undesirable limb.

When pruning, examine the lateral buds and predict their future growth. Maintain lateral buds on the pruned branches which you anticipate will add to the bonsai’s form. If the branch does not have any lateral buds and is not growing in harmony with the tree’s shape, prune it back to the trunk.

Choosing Which Branches To Remove

In general, prune branches which do not contribute to the structure and beauty of the tree. This can include branches growing in the wrong direction and oversized or overly thickened branches.

The imi-eda “dreadful branches” should be pruned away due to their unattractive appearance. Some branches may not be explicitly deformed but do not fit properly with the tree’s design.

Branch pruning is unnecessary for young trees. Early on, the priority is root, nebari and trunk development. After that, branch growth needs to be encouraged so that the basic form of the tree can take shape. This growth can be assisted by wiring the trunk and branches. Branch pruning is the beginning of the “fine tuning” process of creating your bonsai.

Branch pruning is a moderately stressful event to the plant, so it should be avoided during weather or temperature extremes. In summer, the cuts can be damaged by the strong heat and sun.

In winter, the cuts can be harmed because they are easily susceptible to freezing. Another downside to winter pruning is the potential for overly dense foliage growth and overlong internodes on the branch the following spring.

Internodes are the spaces between new buds, and extra space between buds is not desired. The milder conditions of spring and autumn are recommended for the least potential damage to the tree.

The type of plant is also a consideration when choosing when to prune. Deciduous trees are ideally pruned in spring when leaves are not on the branches and new growth has not begun for the year.

Coniferous trees should be pruned at the end of the plant’s dormant period for the year. This is usually sometime between autumn and early winter. It needs to be done before freezing begins.

Pruning the branches is the final act of an extensive process of planning and patience. By time you are ready to cut the branches, you have already nurtured the plant for a long time and aided its growth into something resembling its final form.

Enough growth has occurred to see the branches which add to the bonsai’s form and which ones detract from it. Before cutting, you have chosen the branches to remove and decided on the exact places to cut.

You have also chosen an appropriate time to prune. At this point, all that is left is to do the actual pruning.

Pruning should be done with a concave branch cutter or pruning shears. Whichever is used, it should be sharpened to provide the cleanest, least damaging cuts. The cut should not be allowed to remain open. It can be sealed with a drop of glue, paste or sealant. Once sealed, the cut should heal quickly and growth will no longer occur at the site.