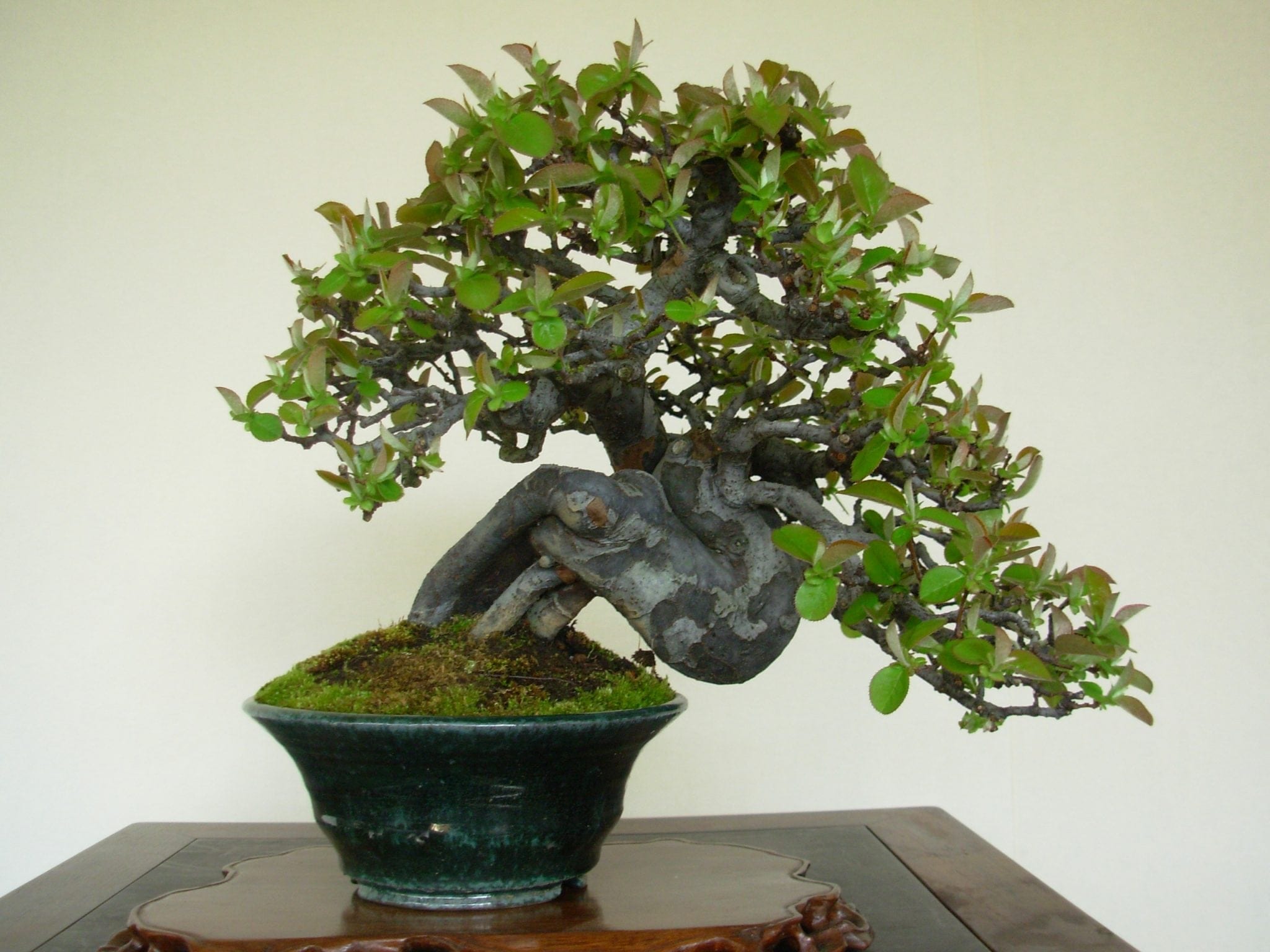 Bonsai is an ancient art of horticultural sculpture. The word’s translation from Japanese means “tree in a pot.” Believed to have originated in China during the Han Dynasty, bonsai was first introduced in Japan some 500 years later by Buddhist monks.

It is an exacting, yet contemplative art. Like sculptures in stone, bonsai’s beauty is revealed through what is taken away.

Of the many types of bonsai, Shohin is among the most challenging and most rewarding. The word Shohin literally means “small goods“. Trees trained to the Shohin size are no more than 12 inches tall or wide, and can be much smaller.

A good rule of thumb is that the potted tree should be small enough to be held on the palm of one’s hand. Shohin bonsai is growing in popularity, especially with enthusiasts who have limited space for growing. The only things needed are the proper tools, the right growing conditions and plenty of imagination and patience.

In order to understand Shohin bonsai, it is best to start from the ground and move up.

The first challenge is planting a tree in a small, shallow pot. Because there is so little soil in the pot, Shohin bonsai must be repotted periodically so that its roots receive enough nutrients.

The smaller the pot, the more quickly soil becomes exhausted. The soil must also drain well to prevent root rot. Transplanting to a slightly larger pot is also necessary to keep roots from becoming too compressed. It is not uncommon for expanding roots to crack a pot when this occurs.

Root pruning may also be necessary to keep the root ball in balance with the growth above. When planting or repotting Shohin bonsai, it is wise to first examine the root ball and comb the roots with one’s fingers to aerate and loosen them. Long, hanging roots should be trimmed to fit using sharp trimmers.

The pot itself should have proper drainage holes in its bottom. Next, a layer of well-draining soil should be added to increase drainage. Tying wires can be set on this layer and pressed in to avoid disturbing roots later.

Finally, the tree may be coaxed into the pot and firmly planted with nutrient-rich soil. A thorough watering follows to help reduce transplant shock and to ensure that water can drain freely from the bottom of the pot.

These steps should be followed each time the bonsai is transplanted.

Temperature and light conditions for Shohin bonsai vary according to the type of tree being trained. The trees may be deciduous species such as Japanese maple (Acer palmatum), azalea or ficus, or evergreen species such as juniper, pine or cypress.

One must keep in mind that some species are semi-tropical and require warmer, sunnier conditions, while others may require periods of cool temperatures and may even be left outdoors in winter.

Watering is particularly important for Shohin bonsai because small amounts of soil dry out quickly. Watering frequently is a must, though the tree’s pot should never be left in standing water. A humid atmosphere is best and will help prevent soil and foliage from drying out.

Training a tiny tree is a painstaking and infinitely interesting task. When correct potting and growing conditions are met, the real enjoyment of Shohin bonsai can begin.

First the desired shape must be visualized. It may help to study examples of a large specimen of the species to get an idea of its proportions and natural growth habit to visualize its shape in miniature.

From there, imagination and fantasy come into play.

A trunk can be curved in one direction with tying wires. Branches can be trimmed back by removing branchlets with sharp trimmers or nipping off buds with fingertips.

Branches can be removed from the center of the canopy to give the bonsai an open shape, or trimmed from the sides for a conical form. Branches can also be tied down to create a drooping, cascading shape.

There is no limit to the variety of shapes a Shohin bonsai can take, but it is important to remember not to remove more than a third of the tree’s foliage in any one year.

Careful thought should come before each pruning. There are only a few branches to work with, and what is removed will take months to regrow.

Ultimately, the process of growing and training Shohin bonsai is one of peaceful meditation and joyfulness gained from the rewards of daily care. Celebrated in art over the centuries, these trees are graceful miniatures of their larger counterparts.