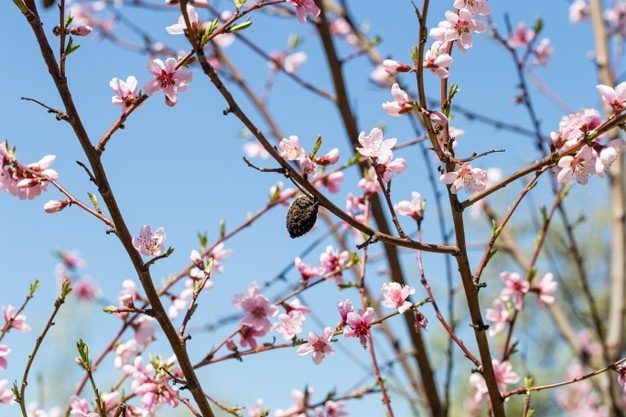 When you look at the tree itself, it’s hard to understand why the horticultural community has paid so little care to it. Its 20-foot height makes it excellent for the garden or a focal point in more enormous landscapes. Prunus mume is distinguished by its gorgeous dark green foliage, vividly pigmented dark green stems, and a pleasing rounded habit in late spring and summer. But it is during the dark winter days, and this plant displays its natural beauty.

In the mid-nineteenth century, Prunus mume was brought to Britain when certain double-flowering Japanese varieties were imported. It is originated from China and Korea, where it has been grown for 1500 years. It is well-known in Japan, where it is highly appreciated as an ornamental. However, it wasn’t until the starting of the century that it became extensively grown.

Prunus mume is a tough tree that can resist most insect pests and diseases and is hardy to USDA zone 6; nevertheless, it is likely to survive the winter. Although it isn’t picky regarding soil, it will not tolerate heavy or damp conditions.

The Prunus mume or Japanese apricot bonsai is one of the rare bonsai varieties that flower in late winter (sometimes during the end of January). Prunus mume trees are widespread in Japan, but they are unusual in Europe. Prunus mume is a species of tree that evolved in southern China and is currently primarily found in Korea, Japan, and Taiwan. The Japanese apricot bonsai grows up to 10 metres tall in forests up to 3000 metres tall.

In a nutshell, Japanese apricot bonsai care: Fertilise extensively and nitrogen-richly after bloom from March to August. Irrigation: Use a reasonable amount of water, but don’t leave it dry up (especially not just before flowering and in hot midsummer).

How long does it take to grow Prunus mume?

Prunus mume requires three years to flower from seed and two years from grafts. Except for the twisted types, which are slower growing, the tree grows rapidly while it is new, three to seven feet each year.

Prunus mume bonsai varieties can be cultivated by collecting seeds from ripe fruit. Sow outdoors in spring or the greenhouse any time of year following stratifying in plastic bags. These bags should be filled with a damp mixture of one-half powdered sphagnum moss and sand for 90 days in the refrigerator.

When water is scarce in the middle of the summer, fewer buds grow or fall off in the worst-case situation. The bonsai only has to be watered moderately in the fall and winter.

For the development of these bonsai, the sun must be shining brightly. Only in the middle of the summer, a tiny shade may be beneficial to the development.

Prunus mume trees are a tough species of tree. If you’re hibernating outside, find a shady, wind-protected spot and then either lower the pot into the ground or cover it with mulch. If there are more extended periods of frost, the bonsai tree must be protected from drying out by covering it, for example, with foil. After the frost time is passed, this must be replaced once more.

How to plant and grow Prunus mume

Before you learn about the ways of planting, nurturing and growing Prunus Mume, listed below are some of the varieties of the plant and their blooming time.

Now that we have talked about the various species of Prunus mume, let’s look at the ways in which one could plant and grow these bonsai.

Every 2-3 years, new apricot bonsai trees are replanted. Afterwards when a 4–5-year cycle is usually plenty. The repotting soil for bonsai must be porous. With apricots, the Japanese tree soil Akadama has proven its worth.

Apricots are flexible bonsai trees that can be used in a variety of ways. However, unusual shapes are commonly occurring. This is most probably due to the fact that apricot bonsai are beautiful due to their blossoms and rough bark. However, the contrast of a striking apricot bonsai with dark bark and white flowers at the end of winter renders the classification into a specific type meaningless.

Use of special fertilisers for flowering and fruit-producing plants (low nitrogen, higher P and K) ensure they get plenty of sunshine. Consequently, these fertilizers never let them dry out significantly whenever the flowers and fruits grow. Ensure that your bonsai plant gets plenty of sunlight and receives the appropriate amount of water. These variables help a healthy bloom.

The apricot bonsai’s wiring branches harden rapidly and are rather delicate. When wiring a bonsai, great caution is needed.

It’s ideal for applying the wire when a new shoot is somewhat woody. The bonsai wire is wrapped around the limb at a 45° angle for this reason, and then the shoot is bent gently and gently into the desired position. The most vigorous branches are winding up into their new place by tugging them downward with very thin wire (1milli-metre aluminium wire is enough).

Young shoots grow stronger rapidly. As a consequence, the wire should be checked every four weeks to verify that it is not pushing in. It’s preferable to unwire the bonsai if there’s a chance of damage. This is where a bonsai wire cutter comes in handy. You use it to cut the wire into tiny pieces that may be removed from the tree with care. Rewiring the tree is mainly pointless because the shoots quickly become woody and hold their new place nicely.

The Japanese apricot flowers are solely on the previous year’s fresh shoots. It’s critical to cut the stems back soon after flowering if you want a bunch of flowers next spring. In the summertime, the new shoots can be pruned back again. Afterwards, the bonsai is allowed to develop without even being pruned until the end of July.

The leaf buds develop shoots that are not as strong as those that are not pruned in the spring (to 2-3 leaf buds). This means that if you want a branch to thicken quickly, do not even cut it in the spring. However, please remember that such shoots might soon turn old and die within a few years. In late summer and fall, bloomers form on fresh stalks. Many blossoms would be lost in the spring if new branches were removed in the autumn.

You shouldn’t just position yourself by the knot while identifying flower and leaf buds. Some nodes generate leaf as well as flower buds, whereas others generate only one. Apricot shoots quickly, harden and become stiff. A sharp bonsai concave cutter is often preferable to a bonsai scissor for trimming your bonsai.

How to care for your Prunus mume

Japanese apricot bonsai make beautiful flower bonsai. They flower early (typically in February) and extensively as bonsai. The blooms of the Japanese apricot tree have such a powerful and pleasant scent and are a nice surprise at the close of the winter season.

In apricots, bonsai liquid fertilisers are being used less frequently, but they are still suitable. You can give double the recommended amount of liquid fertiliser during the growing season.

Aphids produce new growth distortion, honeydew deposition, and sooty mould. Borers attack trees that are stressed. Fertilise the trees on a regular basis to keep them healthy. The cherries are infected with a range of scales. Overwintering stages are controlled with horticultural oil. Spider mites cause yellowing or stippling on the skin, but they’re hard to spot.

Tent caterpillars build huge webbed nests in trees and then consume the leaves. Small nests can be clipped out and killed if only one defoliation. When the insects are initially spotted and are still small, use Bacillus thuringiensis.