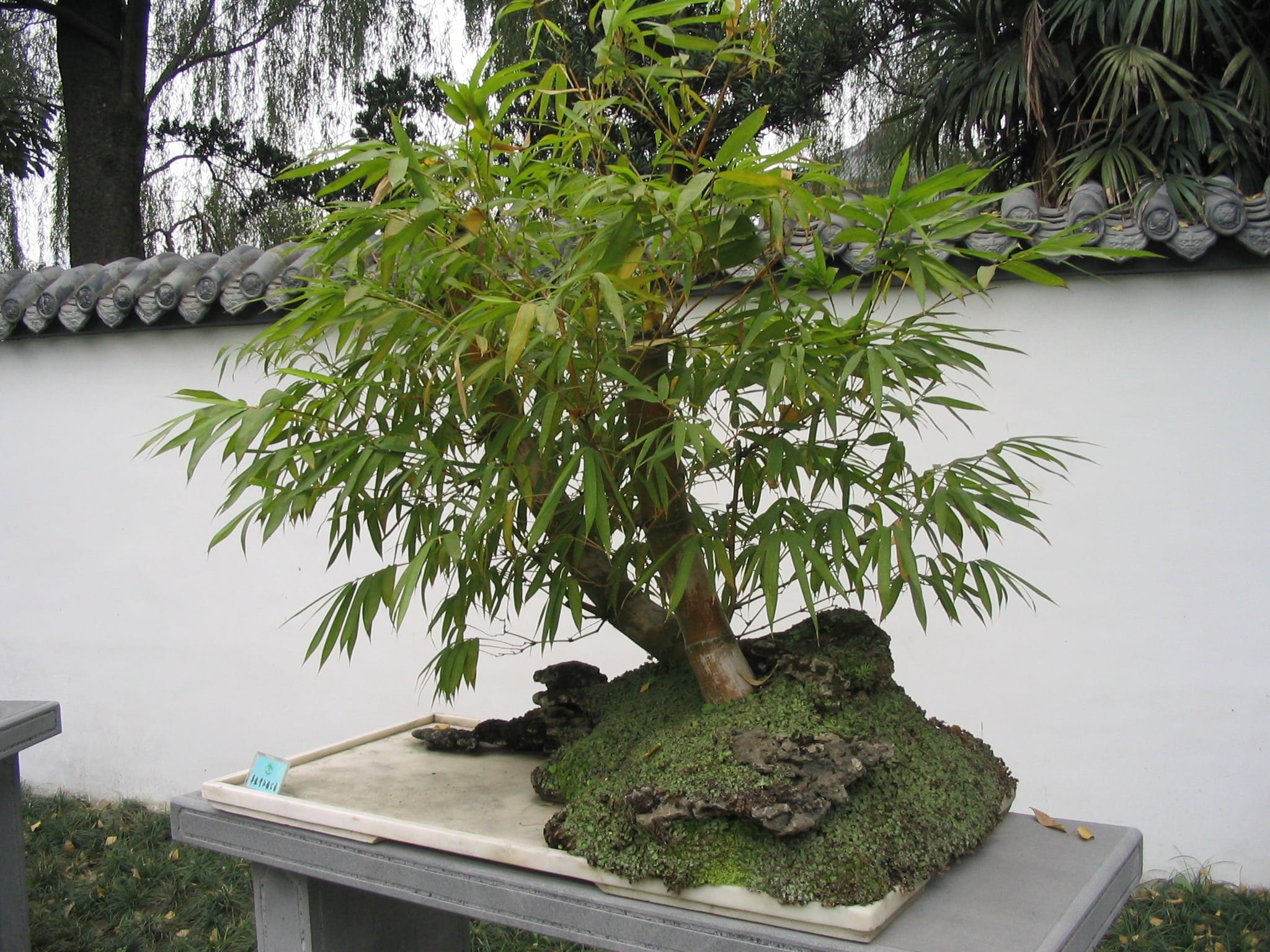 When most people think of bamboo, they imagine the fast-growing hallowed stems that are used for building, cooking, and feeding pandas. What most people don’t imagine is the Nandina domestica plant, also known as both heavenly bamboo and sacred bamboo. Despite the name, heavenly bamboo isn’t bamboo at all, but rather a small shrub.

The shrub is about six feet tall when fully grown. The feature that sets the shrub apart from others, however, is the appearance of the leaves. While most shrubs start out with yellow or light green colored leaves, heavenly bamboo has leaves that are bright pink in color. As the leaves age, they slowly turn from pink to red and finally green. The leaves stay green during the majority of the growth cycle, but when it comes time for the leaves to die off and drop, they change back from green, to red, then purple. This unique feature added with the relatively small size makes the heavenly bamboo a perfect bonsai plant.

Bonsai is a Japanese art that has been being perfected for thousands of years. The concept of bonsai involves taking a tree or shrub and using specially designed cultivation techniques to keep the tree in an extremely small state. This is done by pruning, cutting, trimming roots, re-potting, and other techniques which allow the tree to mature, yet stay in a small form.

Bonsai is often confused with plant dwarfing, but the two are very different. With dwarfing, the plant must first be scientifically studied. Genetic traits must then be altered permanently so the plant in question stays miniature forever, regardless of what the caretaker does or doesn’t do.

Bonsai involves no altering of the original plant traits. In fact, any tree or shrub can be made into a bonsai plant if the caretaker knows what they’re doing. It’s much more difficult to train a large tree to grow in a small pot, but it can be done with the proper care. For beginnings, however, a small plant, such as the heavenly bamboo, is ideal.

Because bonsai plants are not genetically altered, a bamboo bonsai possess all the same traits of the heavenly bamboo shrub, just in a smaller size. This includes the color changing leaves that attract both bonsai experts and beginners to this particular species.

In addition to the stunning leaves, the heavenly bamboo bonsai also grows small flowers in the early summer. The flowers are white in color and clustered close together, giving a slight resemblance to the baby’s breath flower, but with a yellow center instead of white.

The heavenly bamboo bonsai also grows a small red fruit berry that ripens in the late fall. If the grower of the tree doesn’t remove the berries, they will stay on the tree throughout the winter until eventually falling off.

All parts of the heavenly bamboo plant are considered to be toxic to humans, both in shrub and bonsai form. This is due to the high levels of the extremely poisonous hydrocyanic acid compound. Despite this, the plant only ranks as a four on the plant toxicity scale, meaning the “plants are generally considered non-toxic to humans.” Despite this, consuming any parts is highly discouraged.

The berries, on the other hand, contain an alkaloid known as nantenine, which has been shown to be deadly to cats, horses, goats, and other grazing animals. For this reason, it’s highly recommended that those who own any of these animals avoid the heavenly bamboo species. This is especially true for cats, which are naturally drawn to potted plants. If cat owners do decide to grow the species, the berries should be picked off as soon as they appear. This will have no ill-effect on the tree.

The only animal that has been studied and shown to have no harmful side effect from the heavenly bamboo berries are birds. All species can consume large amounts of the berries freely, and will then distribute the seeds in their fecal matter later on. This helps to further popular the species in a vast area of land.

The heavenly bamboo plant species is native to eastern Asia, and because of this, it requires warm weather in order to survive. If the plant is kept outside, it should be placed in full-sun. If growers would rather keep the tree inside, it needs to either be placed under growing lights or in a very sunny windowsill. Growers may also do a combination of both, such as keeping the plant outside in the spring, then bringing it inside during the winter. The lowest temperature that the heavenly bamboo can withstand is is around 45 degrees Fahrenheit (7 degrees Celsius). Ideally, on a day-to-day basis, the tree should be kept around 66 degrees Fahrenheit (19 degrees Celsius).

The plant should also be fed with specially made bonsai fertilizer once every two weeks during the main growing season. The feeding can be cut back to once a month during the winter but should be increased again once the weather warms so the plant has the energy needed to grow.

As with all bonsai, the heavenly bamboo plant should be re-potted as needed. Due to the small size of the shrub, this is typically done every other year. During re-potting, the roots of the plant should be trimmed significantly so they don’t overgrow the small planter box. This will allow for the bamboo to maintain the small size but still continue to grow. This should always be done during the spring so the plant is able to thrive properly during growing season.

It’s also important that the heavenly bamboo plant be kept in well-drained soil. The plant loves water and should be watered daily, but if the soil is allowed to stay damp for too long, the roots of the plant can begin to rot. Once this happens, the grower must re-pot the plant and trim off any dead roots before it spreads to the rest of the plant. If not done quickly enough, the tree may die.