From Penjing to Bonsai: The Impact of Japanese Culture on Bonsai Tradition 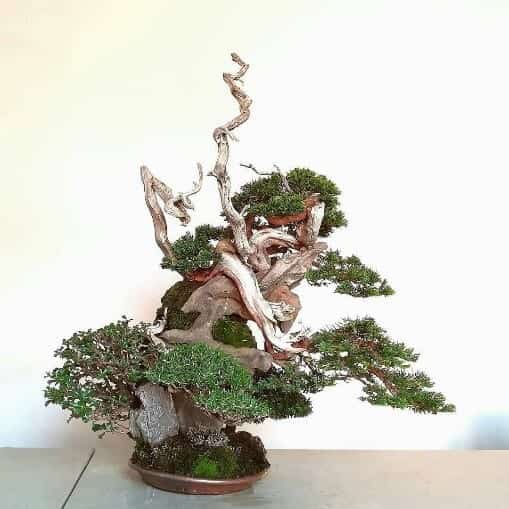 “Bonsai” ( 盆栽 in Japanese) literally translates into “planted in a container/pot” or “tray planting.”

Not merely an art form and not merely a form of gardening discipline, bonsai has turned into a powerful way of expressing love and utmost respect for the living nature.

The Japanese tradition and aesthetic have shaped bonsai, even though the first evidence of planting miniature trees in tiny pots is attributed to the Chinese dynasties back to more than 1400 years ago when the art of penjing was on the rise.

Then again, the true essence of bonsai can be only understood through embracing the Japanese perspective on the ancient tradition and the related esthetic features.

But bonsai isn’t merely an ancient tradition either for it relates to modern-day life in a profoundly significant way.

In a world that is currently faced with rapid urbanization and industrialization which lead to harming Mother Nature to an extent that threatens the well-being of the future generations, bonsai is paving the path towards embracing a higher perspective on the millennium-years old relationship between humanity and the living nature.

From Penjing to Bonsai

The earliest existing record of the practice of growing tiny trees in tiny pots (mind that this practice was not well-defined as bonsai is nowadays) dates back to the Tang Dynasty at the beginning of the 700s in China – or about 1400 years ago.

In an ancient Chinese painting, the Emperor is being presented miniature trees in a pot.

However, for more than 200 years, the Chinese did not turn the act of growing miniature trees in miniature pots into a massively popular discipline and art form.

Instead, it was approximately 1200 years ago when the Buddhist monks brought the Chinese version of bonsai – penjing – to Japan, and it was in Japan where bonsai earned national recognition and gradually started to be practiced massively by the local population.

It wasn’t before 1876 when the Japanese bonsai exhibitions reached outside of the borders of the country during the World Fair in Philadelphia.

Despite the tragic events from World War II, the American troops and the tradition of bonsai intertwined as many of the American soldiers returned back home and further spread the word for the astonishing miniature Japanese trees. The rest is history – but for sure, bonsai made its way across the globe after centuries of careful development of the ancient tradition in Japan.

The aesthetic appeal of a bonsai tree masterpiece is measured only by being able to interpret the core concepts of the Japanese tradition.

As a rule of thumb, a bonsai tree’s value is estimated by the age, as well as the techniques used for shaping the miniature trees.

A major goal of each bonsai artist is making the tiny trees resemble an old tree as authentically as possible.

The reverence for old age is one that encompasses the Japanese understanding of the way elders should be treated – with the utmost respect.

What’s more, reverence for old age in bonsai is further interpreted as a way of recognizing the elders’ journey through life – for it is with age that people are able to learn and grow from the multiple challenges they are faced with.

Also, the accumulated experience of the elders and their relation to bearing and preserving the ancient traditions is considered an important part of appreciating the esthetics in the art of bonsai.

That’s because, quintessentially, a bonsai tree masterpiece is capable of triggering a sense of nostalgia because of the opposition of its small size vs. its aged looks.

On the other hand, a bonsai tree doesn’t necessarily need to be very old in order to be considered a masterpiece – even though the most highly treasured Japanese bonsai trees are the ones that have been successfully passed on for generations.

One of the core concepts residing in the Japanese aesthetic of bonsai is Wabi-Sabi – being able to appreciate the fragility and imperfection of life. This is a beautiful lesson which is further intertwined in the way bonsai trees only become more beautiful from their wounds and the controlled levels of stress applied in achieving the desired visual appeal.

From the rich history of Japanese Zen gardens through the establishment of The Ōmiya Bonsai Art Museum, Saitama, near Tokyo – the Japanese tradition and aesthetic embedded in the art of bonsai cannot be possibly put into strict frames. It takes patience and indulgence in the world of bonsai to be able to fully appreciate and experience the beauty and wisdom that managed to turn a centuries-old practice into one of the most pleasurable and beneficial hobby activities on the globe.